Because of their potential to remove nutrients from drainage, salt marsh restorations have been ongoing in North Carolina and other coastal states. How much these restorations improve water quality is still unknown. Assessing the water quality benefits is difficult in salt marshes due to the complicated patterns of flow and incoming nutrient concentrations. Ebb and flow induce wide concentration and flow variations, and it is usually very difficult to close a water balance.

Aerial view of the constructed marsh at the interface between Agricultural land and the North River estuary, NC, USA

A salt marsh restoration was strategically implemented between drained row-crop agriculture and a nearby estuary near Beaufort in Eastern North Carolina. Construction of this salt marsh was overseen by members of the Bio&Ag Department and was completed in 2007. This project provided a great opportunity to provide answers to the question of by how much do salt marsh restorations improve water quality.

Tidal marshes are by definition almost always open systems where flow and ebb might not use the same entrance and exit. This renders closing a mass balance an almost impossible task. The marsh was constructed slightly inland where an active area, inlet, and outlet could be defined, opening the possibility of closing a water and nutrient balance. 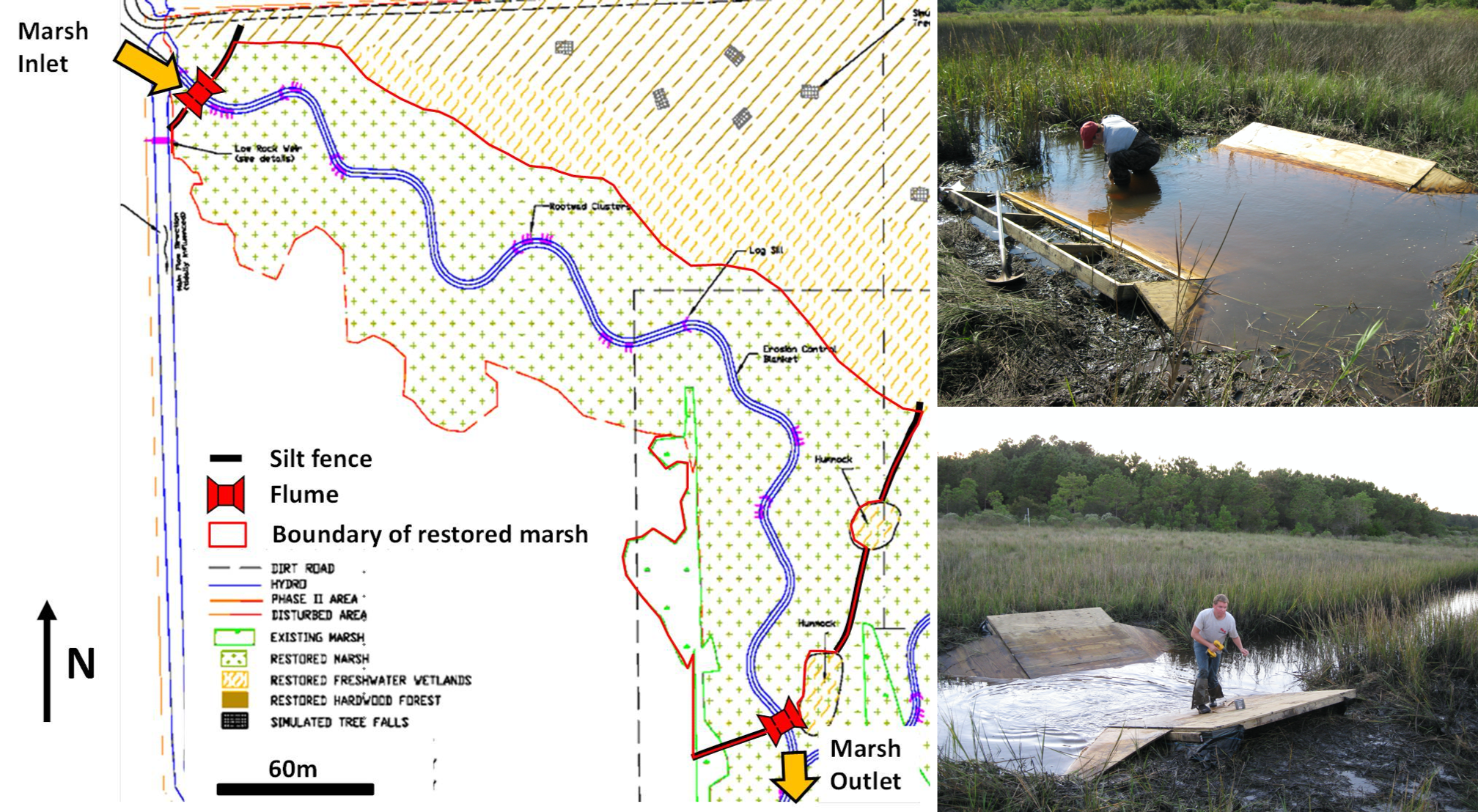 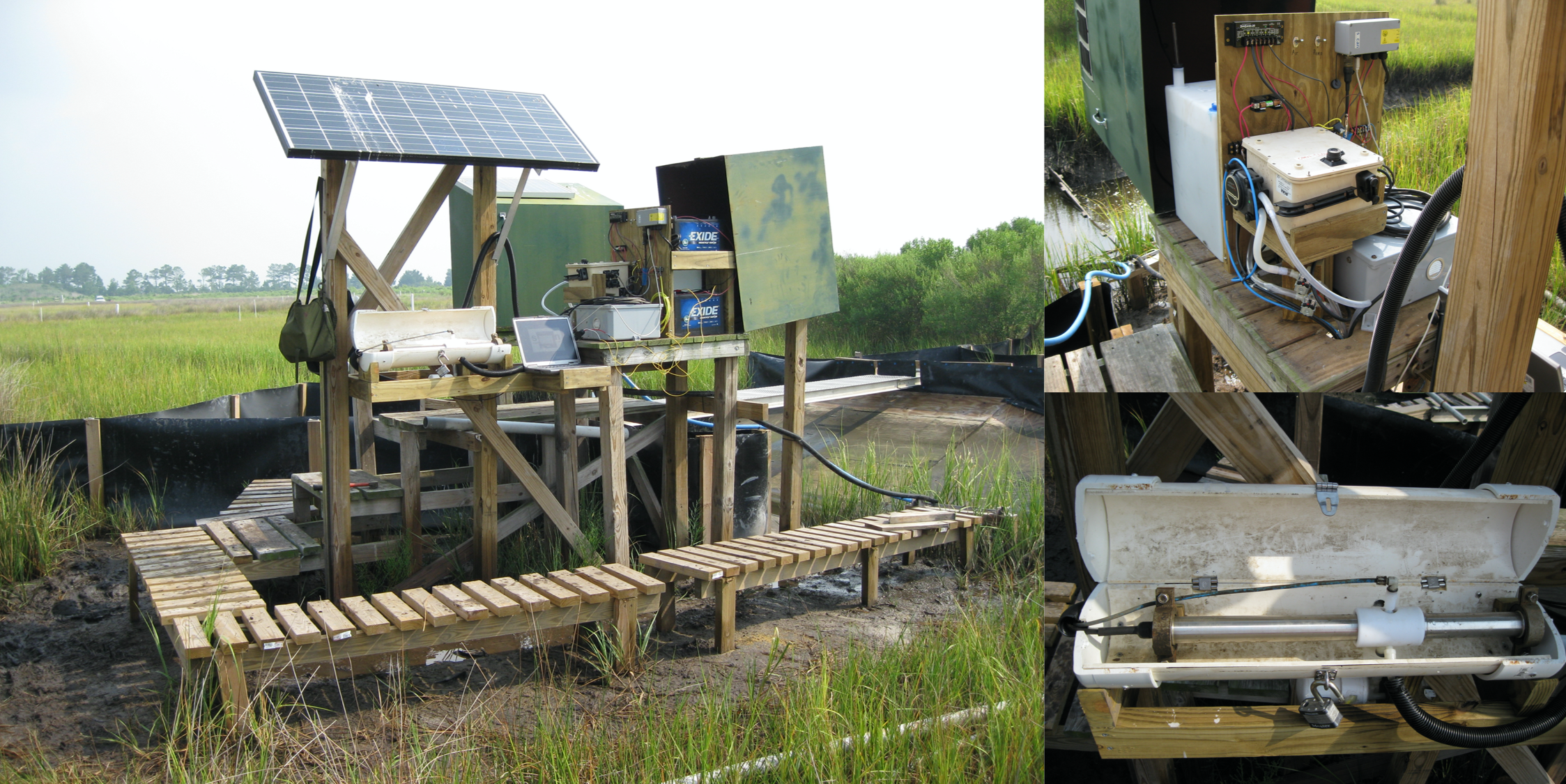 Equipment setup at the outlet station with Spectro::lyser installed above water

Flow patterns in the marsh

The monitoring system was able to capture the very complex flow patterns at the inlet and outlets as illustrated in the video below.

Another fascinating way to represent flow in tidal marshes is the ‘tidal harmonics’ as illustrated in the video below. 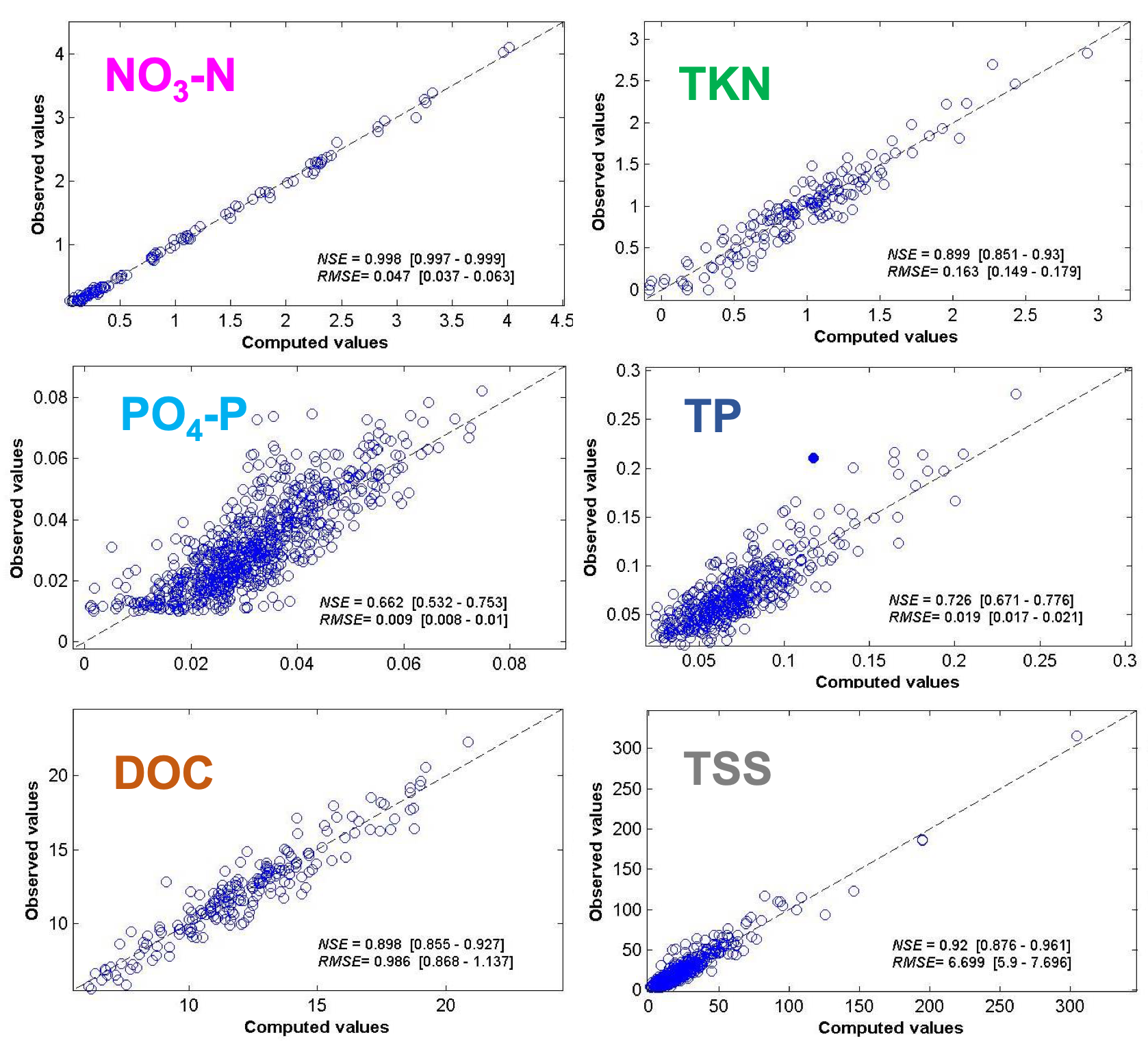 Using the WQRC, we were able to obtain 15 min concentration chemographs over a period of about 13 months (with some holes) at both stations, along with 15 min bidirectional flow. Below are some examples of the reactivity of flow and concentrations for nitrate and for TSS during hurricane Sandy.

Flow and nitrate dynamics at the outlet station in April 2012

From the high frequency flow and concentration data, we were able to calculate nutrient and material fluxes at both stations and compute a mass balance over time 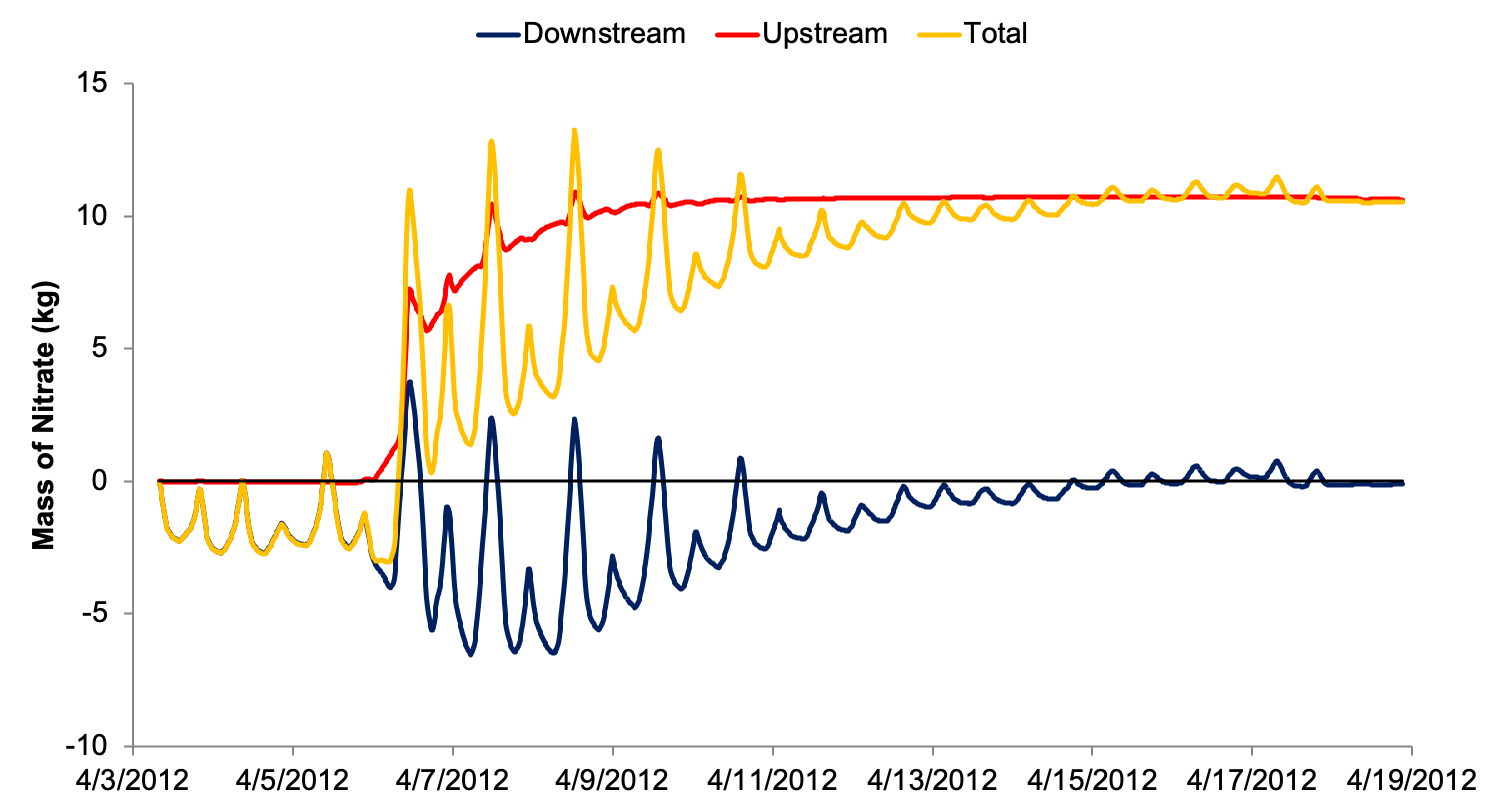 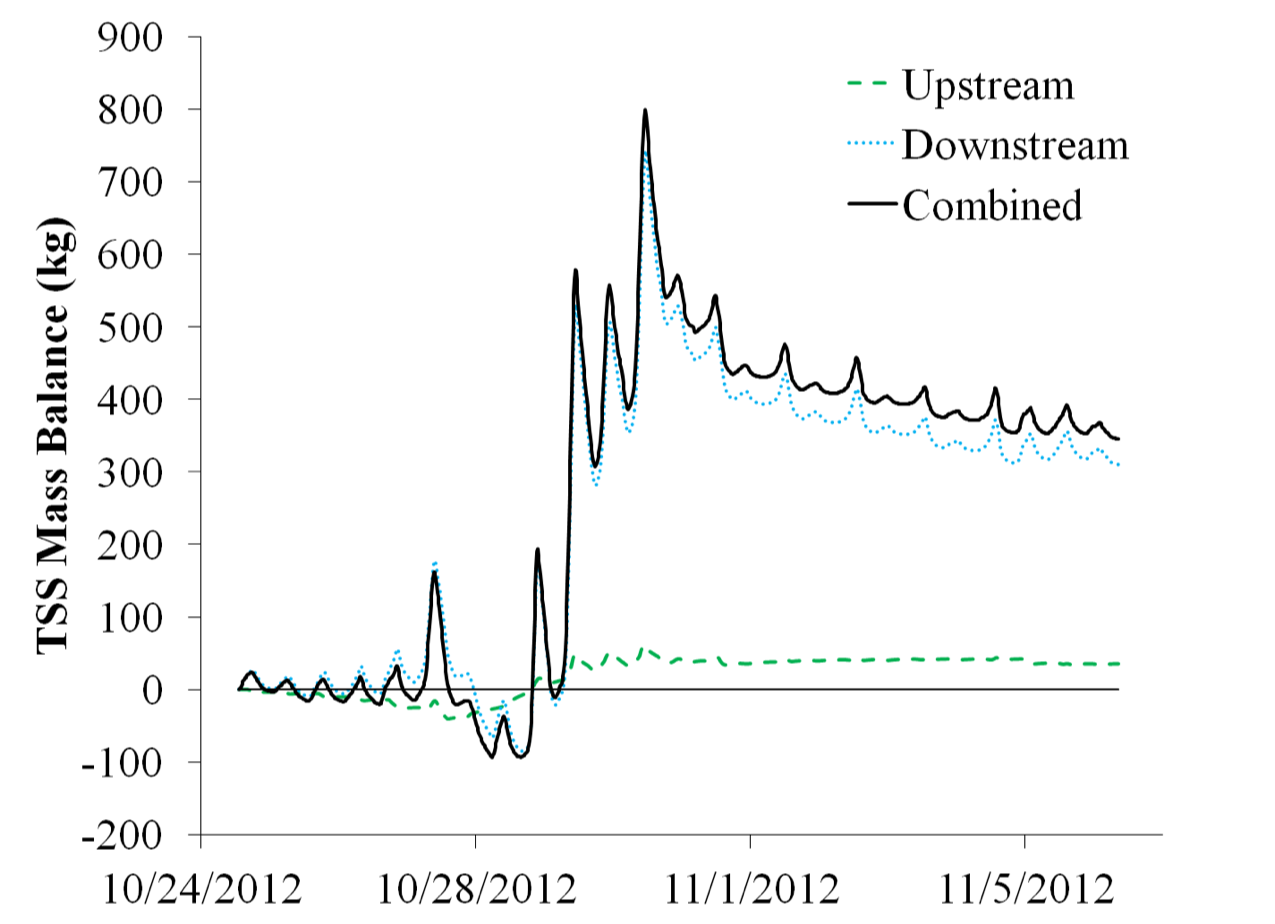 One of the most puzzling results has been the water balance. We expected that because of the balance between rainfall and precipitation, during winter, the excess rainfall would lead to a net apparent “export” of water from the marsh out, and reversely, during summer, the excess evapotranspiration would lead to a net replenishment of water into the marsh from tidal waters (red curve in figure below).

We observed almost the opposite or a mirror image (blue curve in figure below)… In other words during excess rainfall, the marsh acted as a sink for water, and during summer, the marsh was a source of water…?! To this day, we do not have any obvious explanation. We have obviously verified all the sources of error but we were not able to find significant ones that could explain the observed phenomenon of a two-way water pump. 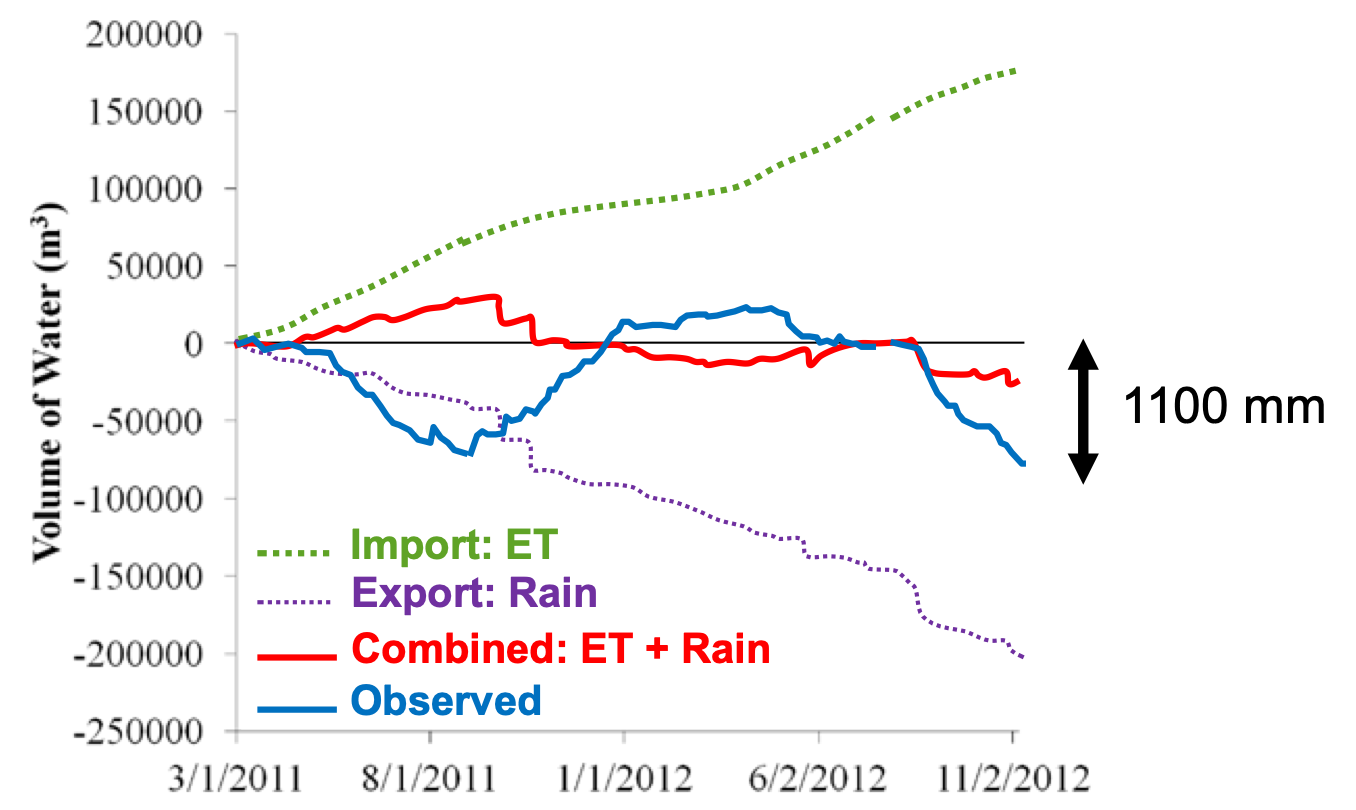 Nitrate retention in the marsh

The skewed water balance did not have significant effects on the computed nitrate balance as nitrate fluxes occurred as short-lived pulsed from the upstream agricultural land. Overall, the marsh retained about 10% of the nitrate fluxes that entered it over the 20-month period. However, there were holes in the water quality data, as we solved fouling problems and were still learning how to use these sensors, limiting the robustness of the final value of the balance. 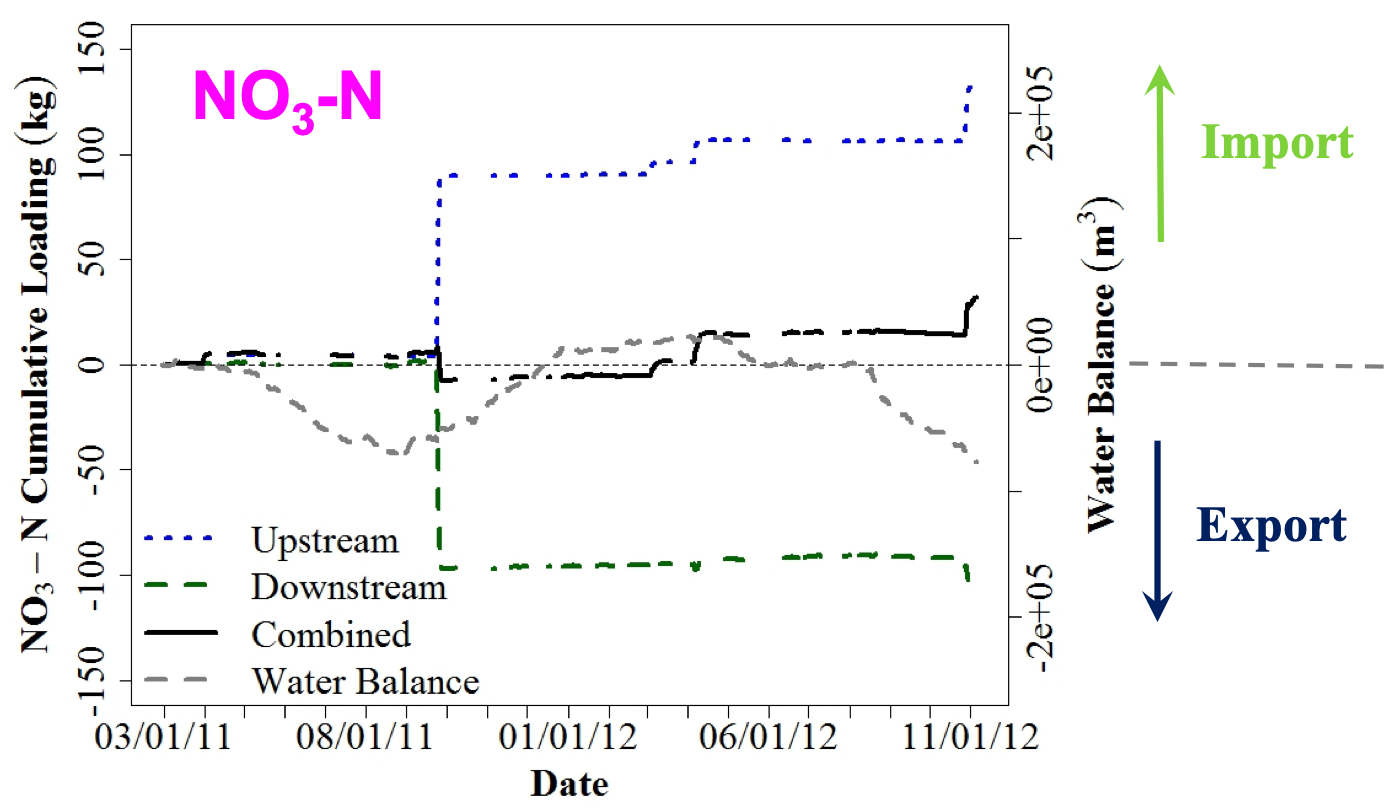 The marsh behaved as an outwelling one-way nutrient pump

The water balance did have an impact on other nutrients such as dissolved organic carbon (DOC) and ammonium + organic nitrogen (TKN). The reversal of the water blance was not accompanied by a reversal of the direction of the fluxes. Rather, there was an apparent net export of DOC and TKN from the marsh out to the estuary, illustrating the fact that the constructed marsh acted as an outwelling one-way nutrient pump, despite the two-way water pump. These resuls are illustrated in the figures below. 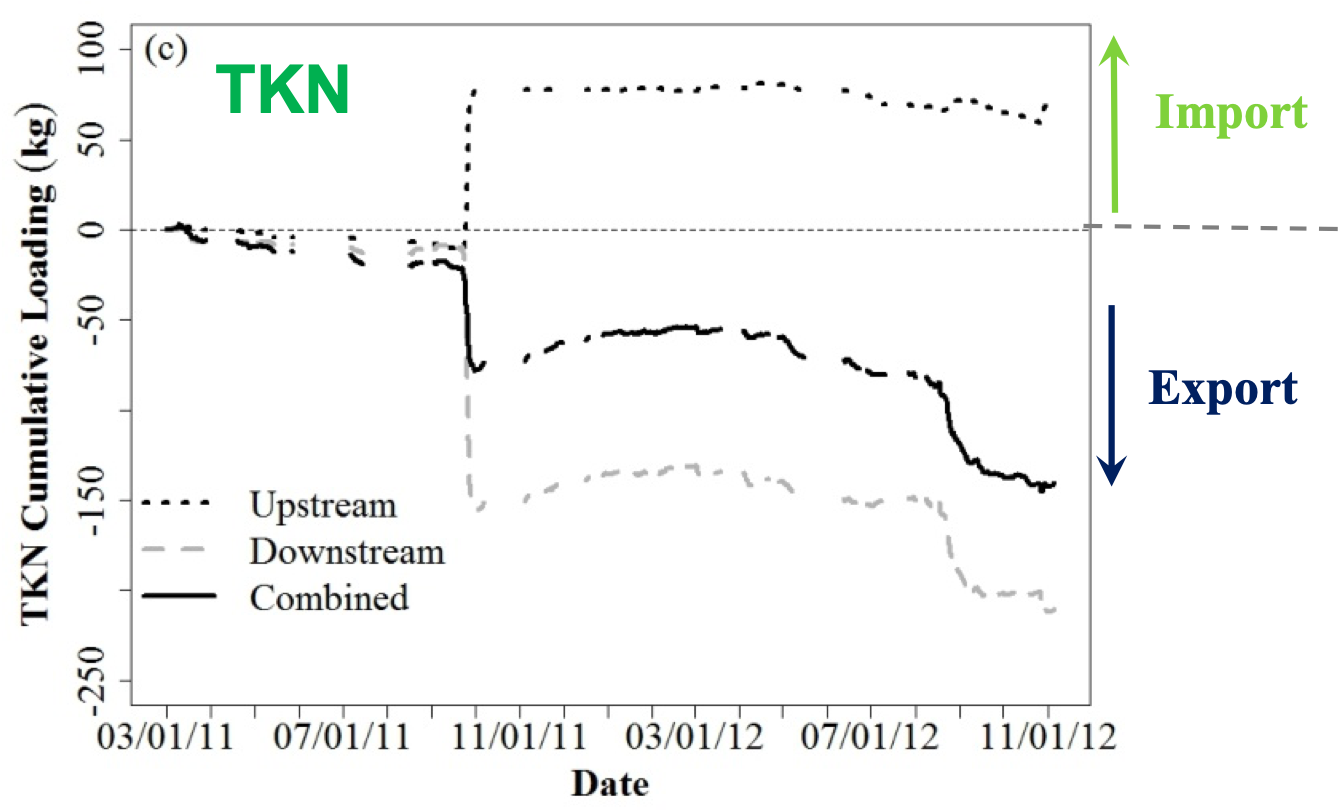 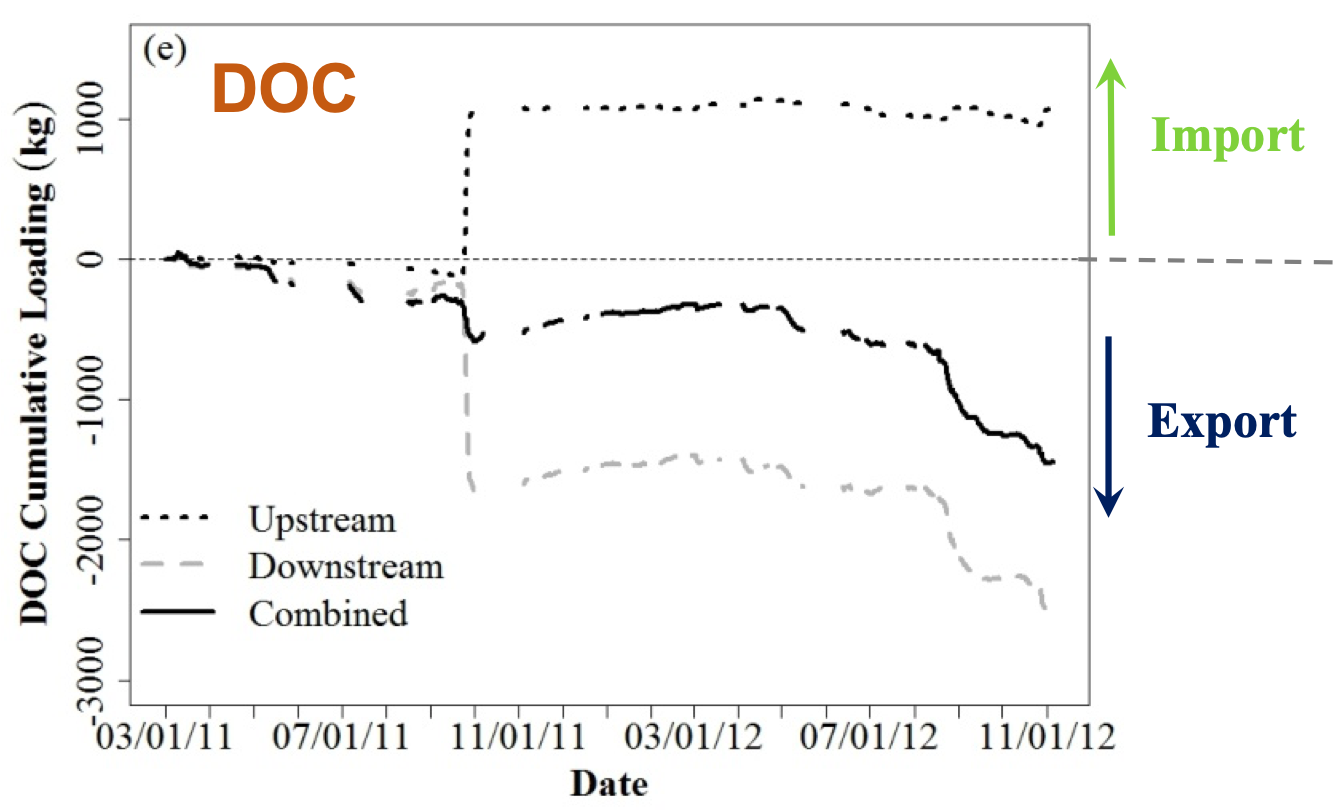 Publications associated with this project